Last April the 4th TRM the King and Queen of Spain travelled  to Japan on an official State visit. This was the first visit King Felipe and Queen Letizia payed  to Japan as monarchs.

The visit’s agenda included meetings with the Emperor and Empress of Japan, Akihito y Michiko,  and the heir to the throne prince Naruhito and his wife Masako.  Also they will met with the Prime Minister, Shinzo Abe, and chaired several gatherings with businessmen of both countries.

On the 6th of April H.M the King Felipe  opened and presided the XXVI Japan-Spain Business Cooperation Committee in Tokyo.   During such event Hitotsubashi University and Bergé y Compañía will jointly make a presentation on Bergé International Talent Programme.   The King Felipe chatted with some of the Programme participants. 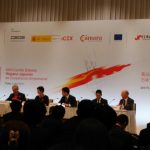 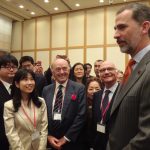